Yes, there was even a "chin-do" in the house

In 2018, some dipshit truckdriver who owed more than $30,000 in child support abandoned his home and moved out of state. He had to go on the run before they found him and arrested him. He left so quickly, he left just about everything he owned: 2 cars, a pick-up truck, appliances, a hospital style craft-matic bed, power tools, expensive furniture, a chest styled deep freezer, and even most of his clothes.

It did not take much time to figure out that the guy was a total sexual freak, spending tens of thousands of dollars on anything sex related.

Not Jeff, but close enough

Jeff had long established the fact that he was a eBay seller. He sold tools, motorcycle parts, and other stuff that he found when he was cleaning out old homes. If you found something odd, he was the guy who knew what it was. This goes for the most obscure items. He was also a screaming drunk who couldn't do his job without a pint of vodka in his back pocket. This is probably why he even started with eBay because he couldn't make ends meet unless he found outside income.

Jeff was also dating a woman who lived next door to him. She is in her sixties, and probably didn't "put out" as much as Jeff was used to. Jeff was always ogling women and making comments.

They had to take out bags and bags of sex toys

On day three of the clean up process, almost all of the small things had been removed. The food, dishes, and knick knacks were either tossed in the dumpster or taken home by the 3 women. Jeff took the power tools and sold them.

So yes, it was day 3. Nearing five o'clock (quitting time), the gals were packing up their stuff and mentioned to Jeff that the huge bed in the master bedroom had drawers in the bottom of it, but they had not been able to open them as they appeared to be stuck shut. Jeff, thinking that they were fake drawers made to look real, sighed to himself and went to the room and see what was up. As it turns out, the drawers really were fake, but at one point in time, they had been real drawer accesses that had been glued shut.

Instead of prying the drawer faces off, Jeff decided to just lift the bed, box spring, and slats off to see what was housed in the drawers. It turns out that the drawers were also removed, leaving a very large hidden space under the bed. All Jeff could see was an oddly shaped box that resembled a triangle.

Inside that triangle shaped box, Jeff found something that would change his life forever: 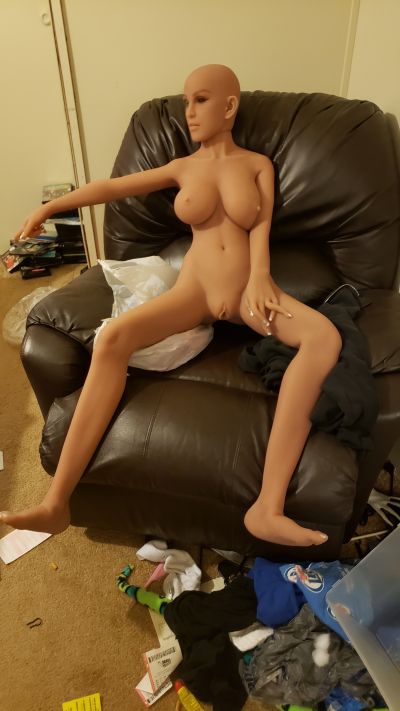 The cleaning ladies were dismissed, their job done and only the huge craft-matic bed still in the home. Jeff struggled with ways to remove and store his new doll, but he was perplexed. Finally, he moved the bed itself and proclaimed to his boss "Wow, look what I found!"

Jeff quickly began to furiously type into his phone. "Gee guys, this thing is worth like $1,600...maybe we should sell it on eBay and split the profits." This sounded great; if it was worth that much, everybody around would get $400. They all agreed and the doll was carefully packed back into its box. The shape of the doll and all of its accoutrements fit perfectly into that odd cardboard contraption, and the matter was shelved for the time being.

Days went by. No news came from Jeff and the doll still remained in it's box in the empty house. When asked what he was doing as far as eBay was concerned, Jeff explained that he was lazy and had not yet put an advertisement up on the website yet. Finally, after 3 weeks of pestering, Jeff told everybody that yes, he had put up an advertisement, and in fact had a buyer. For this reason, he would need to take the doll home because that is where the buyer would be meeting him.

Curiously, Jeff did not take that box or all the other tools it held. Any seller would want to give everything available to a buyer, wouldn't they? The box contained clothing and wigs for the doll, which should have added to the doll's value.

Why are you locking me out of my own garage, Jeff?

Once the doll was found, Jeff started paying attention to any lumber that he might take home. He claimed that he was building shelving in his garage, but he never actually took 2x4 lumber home, just paneling, something that is too thin to support weight. Unbeknownst to anyone, including his sixty year old girl friend, he was building a locker in his garage. skinned by such paneling. This locker would be meant to house the doll, appear to be someplace to store gasoline cans and tools, and totally look like nothing goofy was going on.

At the same time, Jeff was also installing a hasp on the outside of his garage door. This would allow him to place a lock and prevent anybody within the home from entering the garage. This was revealed by his sixty year old girlfriend when she complained to her friends: Why would somebody need such a thing?

the story comes to an abrupt halt

Not the actual garage, but it is a garage just the same

So now Jeff has the doll in his home. He has constructed a way to store the doll and keep it hidden from prying eyes. He has also created a space that he could spend time with the doll without being disturbed. But Jeff kept telling us that a buyer was coming and that we would all be given our $400.00 soon.

Two weeks go by and the money is nowhere to be found and neither is the doll.

Suddenly, on a weekend away from work, Jeff gets drunk and plows into another car. In one fell swoop, he had lost his license, his car, and he called his employers to tell them he was quitting. That was the last we heard of Jeff.

We never saw him again, or the doll. It is most likely they are living happily together in his garage.

Jeff's Sex Doll is a part of a series on Things