Mr. Mitchell, also popularly known as Mister Mitchell, was a gym teacher for an elementary school in central Ohio. He was also the most terrifying person ever to live... especially if you were a child who had his gym class when you were 8 years old.

In reality, Mr. Mitchell was a great guy. Friendly, caring, honest, and healthy were all words used to describe him.[1] He taught gym class for over 30 years at his particular elementary school and was truly before his time as far as physical health was concerned.

The man, despite having a bright silver 1967 Corvette Stingray[2] and a black on black 1963 Mercury Comet,[3] two of the most coveted automobiles in the world, would jog[4] to work. And this was in the early 1970s, a time before jogging was recognized as a healthy endeavor. To go further, he was the target of much attention from his fellow female co-workers and the envy of the male staff at his place of work. Despite this envy, he was considered a "bro" and got along with everybody.

But there were problems on the horizon...

Mr. Mitchell was diagnosed with Oral Cancer in spite of the fact that he never touched tobacco products or any other unhealthy shenanigans. He sadly announced that he would be taking a leave of absence to take care of the problem and much of the community were saddened by this development of events.

Hospitalization, Treatment, and Out Patient Work

Mr. Mitchell was in the hospital for six weeks. He underwent a few surgeries and had 3 tiny portions of his jaw bone removed. No scalpel or laser touched his lips or cheeks, so he had no evidence of actually going under the knife. Everything was internal. He was put on chemotherapy for a few months, but never lost a bit of hair, and because of his excellent physical condition, nobody could tell that he had undergone such treatments.

The doctors did a wonderful job, and because things went so well, he was soon back at his job, teaching gym class to kids. Everybody was quite happy to see him back at work because he was so respected and was really a nice guy. But there was one problem...

They had removed portions of his jaw, and so Mr. Mitchell would have to have it wired shut for a few weeks.

To the average person, this might seem like a regular, normal thing that could be dealt with easily. But to 8 year old children, it was absolutely terrifying.

This is what he sounded like, kinda. It's been 45 years. Just imagine a really tall, skinny guy who looks like Angus Scrimm who can't move his jaws. 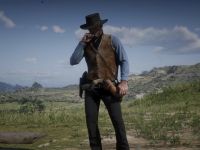 Having his jaws wired shut turned Mr. Mitchell's normally melodious voice into a low, hushed tone that resembled a feral growl. His height did not help matters either, he towered over his students and adding the gruff, low utterances made Mr. Mitchell monstrous. Many children commented that he appeared to take on the visage of "The Tall Man"[5] from the popular Phantasm movies, but many other children thought he looked and sounded like "The Man With No Name" from the Dollars Trilogy by Sergio Leone.

Either way, he wanted to teach as it was his life long love and vocation. It is too bad that he marked the several hundred children in his classes with a brand of fear and loathing that would take decades to erase.

Mr. Mitchell went into remission and then his jaws were un-wired. He went on to teach for another 17 years and soon regained his popularity. The cancer had to have been a fluke. He never scared students again, unless they were problematic or unruly to the point where they would need to be sent to the principal's office.

As of 2018, Mr. Mitchell was still seen, cruising around in his Corvette and being a great guy.

Mr. Mitchell is a part of a series on Manly Shit

Mr. Mitchell is a part of a series on People*
* I used toilet paper image because I couldn't find a good graphic for "human garbage"