Putting A Tire On A Rim

Even the most seasoned and respected redneck I know did not believe that you could do this, but it is an amazing and very fast way to Put a tire back on it's rim. This is probably because without understanding the science going on in the background, this seems like a pretty stupid thing to do. In fact, even if you do understand the scientific reasons, it will still seem like a pretty stupid thing to do. What makes this even more crazy is that it will work whether the tire is on or off the vehicle. 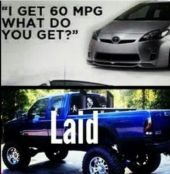 So you are out muddin' with your buddies, hill hoppin' in the middle of nowhere, or just generally fucking around, doing something you will probably shouldn't be doing. Suddenly one of the tires on your 4x4 deflates and the bead hops off of the rim. What the heck are you supposed to do now?

You, and most of your drunk friends are all pissed off. Looks like an afternoon of ripping shit up and drinking Jim Beam until you are blind is over. But one of your buddies immediately hops into the bed of your truck and starts rooting through your tool box. You do have a tool box bolted down back there, right?

"Here we go," he says as he holds an aerosol can up.

An example of what to use

In the above scenario, your buddy could be holding one of several aerosol cans up for your inspection. Most people prefer to use an ether based starting fluid to do this job, but I have seen several other items used. What you are looking for is something that will burst into flame explosively. It is probably a good idea to have a fire extinguisher handy as well.

Other items you can use to do this include:

Meth lighters are an excellent choice for this method.

As mentioned above, it does not matter if your tire is still on the hub or if you have taken it off and put it on the ground, this method will work. However, there is one thing you will have to do differently if your wheel and tire are still on the vehicle:

If the wheel and tire are still attached to the vehicle, use your car jack to lift them off of the ground and give them enough clearance so that the exploding tire will not expand into an obstacle. That is the only difference.

Now, once you have discovered that your tire bead has jumped out of its seat on your rim, spray some of the ether based starter fluid (or the other stuff mentioned above) into the tire using the gap between the tire and the rim. Use a good amount. In extreme cases, you may have to spray a "trail" of the ether starting fluid all the way around the rim. Also, spray a bit of the starter fluid on the outside of the tire to act as a "fuse" to light the fluid inside the tire.

With your fire extinguisher handy, use your meth/crack/bbq grill lighter to ignite the fuse on the outside of the tire. This should cause a rapid explosion within the tire that will pop it back onto the rim. Sometimes you will have to do this more than once because rubber tires with steel beading are a bitch to work with when you are out in the forest.

The best part about this trick is that even if people have seen it done before, they are still shocked and happily surprised when it works. Some folks even call it BLACK MAGIC.

Once ignited, ether based starter fluids (and the other items mentioned above) expand in a rapid explosion. This explosion is contained within the tire and has just enough force to expand the tire as well. Tires are constructed so that the bead around the rim has a "memory." This memory causes the bead to slip back on the rim where it is designed to be. Or, it is black magic.

What To Do After

After your explosion has re-seated the tire onto the rim, quickly reinflate the tire just in case it feels like slipping off again. Also, if there are any residual flames hanging out, pour your beer on them or stomp on them to put them out. Never waste beer.

In the following video, several variations on this method are used on various tires. One fine gentleman even uses a squirt bottle to put kerosene inside of a tractor tire. Note all of the exited responses when this method works.

Why Not Take It To A Shop?

All mechanics are assholes

I performed this trick several times on car, truck, and off road vehicle tires. This is mostly because I tend to abuse the hell out of vehicles. I have also personally seen this trick performed on a large tractor tire. The only difference was how much starter fluid the guy used and how far back he ran once the fluid was ignited.