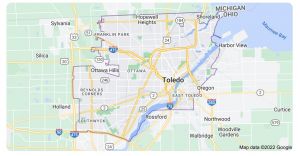 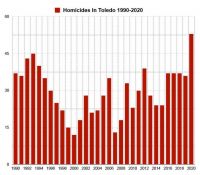 Toledo, Ohio, is one of the most dangerous cities in the country. There were 1,192 violent crimes for every 100,000 Toledo residents in 2016, more than three times the statewide violent crime rate and nearly triple the U.S. violent crime rate. A high crime rate can depress home values, and real estate in Toledo ranks among the least expensive in the country. The typical home in the city is worth just $79,100 compared to the value of $205,000 of the typical American home. It is also lower than in all but 13 other U.S. cities.

As is the case with nearly every other Midwestern city, Toledo's population is shrinking. In the last five years, the number of people living in the city fell by 2.6%.[2] Also, I have had a gun pulled on me in a threatening manner more often in Toledo than any other city.[3]

Just some quick links so that I can check up on the shithole[4] I am currently living in:

Safe and East Toledo never belong in the same sentence. [5]

They beat the national average for crime in everything except murder. [6]